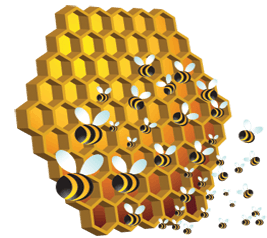 
Learn about bee products and receive tips and information on natural health topics.

A question we are asked many times is “can royal jelly help with fertility in males and females?”

Certainly the inference is that it is most commonly used to boost fertility in women, but it is also taken by men for the same purpose of increasing virility, libido and sperm count.

It isn’t just taken prior to conception but also during and after pregnancy to assist with hormonal balance and regulation, as it may assist in providing support to the endocrine system.

We’ve also discussed on our blog that studies have shown Royal Jelly may have estrogen like effects, which can help the many women who suffer from low estrogen levels. Of course, we strongly advise that you consult with your health care professional before taking royal jelly for fertility, or during pregnancy or whilst nursing.

Also, it’s always good to have some scientific support before embarking on a regimen of supplements to boost fertility. In the “Infertility Cure”, fertility expert Dr. Randine Lewis describes various studies detailing royal jelly as potentially beneficial to fertility.

We’ve covered in great detail around our website the many and varied benefits of royal jelly and we’ve covered also its chemical composition and nutrient content.

If you decide to include this product in your diet then obviously you’ll have choices to make. We recommend that you start by reading this article on how to select bee products, as a way of understanding the differences and making an informed selection.

Royal jelly effects us all in different ways and it’s important to understand the benefits of this product, particularly when considering something as important as fertility and reproductive health.

There have been too few studies on humans to conclude any real benefits when considering this product and its impact on fertility. Lab studies on animals however have shown that there are some potential benefits to fertility and the ability to conceive. A study published in the June 2006 issue of “Animal Reproductive Science” tested the effects of royal jelly on sheep, comparing it with placebo.

The rates of conception were higher in the groups given the substance than in the placebo groups, indicating a positive benefit on reproductive health and the likelihood of conception.

A study published in 2010 [“Animal Reproductive Science”] examined the effects of royal jelly on male fertility in rabbits. A total of 24 rabbits were given placebo or doses of royal jelly. Testosterone levels rose to as high as 143 percent of initial levels and sperm improved by as much as 18 percent with actual sperm output increasing by as much as 65%

Generally speaking animal studies are intended to be useful as indication of the potential effect on humans, though in some cases human effect is not a consideration.

It should be stressed that failure to conceive can be due to all manner of causes. It is important for women generally to have an adequate amount of Folic Acid in their system for conception can occur. We also know that a lack of the amino acid Arginine can result in a low sperm count in men. Both Folic acid and Arginine are present in royal jelly, so this may be the link to some of the successful clinical trials when looking into the substance and its impact on fertility.

I often recite the story of the Duke and Duchess of York who were both said to be taking high dosages of royal jelly en route to conceiving their daughter Princess Beatrice!

Many people ask what is the optimal dosage for increasing libido / fertility in men, and while there’s no specific scientific studies that help answer this question, we generally recommend a dose of around 1000mg per day. This can be taken easily in capsule form using a product like our 1000mg royal jelly capsules here.

Various studies have been conducted into the effectiveness of royal jelly in improving libido, desire, energy and sexual function, in both men and women. There is little doubt that our sex drive diminishes at various times during our lives. Stress, illness, or simply that natural course of aging can have a dampening effect on our love lives leading to increased stress and anxiety on ourselves and our partners. Royal jelly has been used for centuries as a natural libido aid and aphrodisiac.

While there are conflicting opinions among experts as to the cause of low libido/desire, there is a commonly shared view that certain foods can help. A diet rich in fruits, fibers, vegetables, grains and legumes can help assist libido and sexual desire, as can many of the traditional libido enhancers such as ginger root, cardamon, cloves and fresh garlic, pepper.

On the supplement front, both ginseng and royal jelly are used to increase libido, though we don’t generally recommend ginseng since it can have other negative effects on the cardiovascular system, particularly in older people.

Royal Jelly has been shown to have positive effects on impotence in men. It can work positively on the prostate gland, and also to relax urethra compression. Impotency is by no means incurable and it isn’t always necessary to resort to harsh chemicals and prescription drugs to assist the problem. Natural products like RJ have been shown by Chinese and Korean researchers to be effective in the treatment of different libido / fertility related problems including impotency.

Nowadays there’s a lot more awareness of health supplements and far more people are aware of the health benefits of royal jelly particularly with its reputation as an anti aging supplement.

Whether or not something we are taking is known to work, or even known to be safe, is something that we conveniently place in the back of our minds. But what we need to understand is that not all supplements are created equal, and when it comes to nutritional composition we find royal jelly to be amongst the top, at least in terms of its potential benefit as a natural rejuvenator and its anti aging support on human health, fertility and reproduction.

Of course there are other substances which attract our attention from the beehive, honey perhaps being the most popular followed by bee pollen.

Bee products are unusual in the way they are so different yet they contain quite similar properties. They’re different in the sense of how they come to be.

A nutritionally dense substance which is basically select pollens collected by honeybees from plant life and bundled together into tiny pellets and transported back to the hive. Mixed along the way with certain bee secretions the pollens take on a wide range of nutrients, actually with quite an impressive nutritional profile. Packed with proteins, usable carbohydrates, vitamins, minerals, amino-acids – bee pollen is a complex substance which has the capacity to provide us with all of the nutrition our body needs. That in itself is quite remarkable, given the simplicity of its origins in the plant and insect world.

This role essentially is in the nutritional nurturing of the bee larvae, creating and ongoing support of the ruler of the hive, the Queen bee. This remarkable insect possesses certain powers which are bestowed only on her and are missing from the rest of her companions in the beehive. These powers include a remarkable capacity for longevity and reproduction, far out-performing the workers/drones on all levels. Her only source of power is through her nutrition is royal jelly.

The story of the beehive becomes complete when you examine the role of propolis, widely termed ‘bee glue’. It is also collected externally from the beehive by the honeybee from the sticky resins of plant bark and leaves, then returned to the hive where it is used to repair cracks in the hive wall and create a sanitary foundation for the hive population. It has strong anti viral and antibiotic properties which essentially seal the hive against viral attacks from the outside world, rather like a computer firewall, to use a modern analogy.

To combine all four ingredients in one convenient capsule we recommend ‘Total Bee Plus‘.

We send occasional updates, around once per month. You may unsubscribe at any time.