Referred to as the ‘Food of the Gods’, bee pollen is a superbly nutritious product and is used world-wide as an energy boosting supplement, taken in fresh granular form or pills.

Pollen is the male seed of flowers, created in the stamen within the blossom of the plant.

Honeybees collect the pollen and during the collection process it is combined with secretions from the bee, as it is worked from the stamen of the plant. The bee uses it’s tongue and mandibles to collect the pollen, it then brushes the pollen from around it’s mouth area using it’s forelegs and moves the now sticky substance towards it’s second pair of legs. The worker bee assembles a mass of pollen, all of which has been mixed with the bee secretion and moved to storage on the bees body and legs. When the bee has collected sufficient pollen it returns to the beehive to deposit the load. 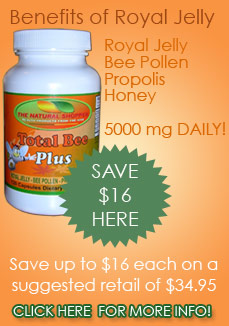 What is the chemical composition of bee pollen?

Because of the plant origin of bee pollen the actual chemical composition of will vary depending on location and season. Regardless of regional and seasonal variations, the product is very rich in B Vitamins 1,2,3,5,6 and B 12, contains Vitamin C, A and E along with Carotenoids and Folic acid.

Bee pollen also includes collagen and lecithin. Lecithin is associated with the dissolution of body fats and is an effective constituent of bee pollen that can help with weight loss and weight control.

Bee pollen contains all of the essential components of life. The percentage of rejuvenating elements in bee pollen remarkably exceeds those present in brewer’s yeast and wheat germ.

Examinations of the origin of collected pollen indicate that the honeybees only collect pollens which are rich in nitrogenous matter (amino acids), leaving lesser quality pollen behind.

Around 20% of bee pollen is composed of amino acids and proteins, and it is extremely rich in Rutin. It is a rich source of minerals, including magnesium, calcium, copper, manganese and more.

Bee Pollen and our health – A complete food in every sense of the word, extensive tests have concluded that life can be sustained on an exclusive diet of bee pollen and water alone.

Research from the Royal Society of Naturalists stated – “The nutritional tests supervised by the station at Bures on hundreds of mice have demonstrated that pollen is a complete food, that it is possible to let several generations be born and live without the least sign of distress, while nourishing them exclusively on bee pollen”.

The list of potential benefits to health is simply vast. Here are some of the more common associated health benefits of bee pollen:

Bee pollen as a dietary supplement may help us in many ways. Bee pollen is taken by many people to supplement the nutrients that are deficient in our diet, nutrients which are important not just for raw energy, but also for their ability to remove harmful ‘free-radicals’ or toxins from our body.

Bee pollen may help with many conditions including obesity. Its ability to act as an appetite suppressant and also a general craving suppressant, makes it popular amongst people looking to loose weight or even quit smoking.

Many athletes around the world attribute their successes in large to using bee pollen as an effective energy/stamina supplement. Muhammad Ali contributes his success to bee pollen and many Olympic athletes have used pollen during training.

Steve Reddick – GOLD MEDALIST on the US Relay Team at the Montreal Games 1976 says: “It gives me a lot more energy too. I used to take honey but this Bee Pollen is far better. I take 3 pills a day”

Dr. Carlson Wade in his book ‘About Pollen’ states: “Bee pollen contains a gonadotrophic hormone similar to the pituitary hormone, gonadotrophin, which functions as a sex gland stimulant. The healing, rejuvenating and disease-fighting effects of this total nutrient are hard to believe, yet are fully documented. Aging, digestive upsets, prostate diseases, sore throats, acne, fatigue, sexual problems, allergies and a host of other problems have been successfully treated by the use of bee pollen”.
Pollen has been taken for centuries to assist in body system regulation and to provide a tonic for reproductive systems, male and female. Providing energy and stamina, it is also considered to assist in alleviating infertility and impotence, particularly when combined with honey and royal jelly.

A note on bee pollen and prostate disorders – Clinical research suggests that bee pollen can reduce prostrate enlargement and painful symptoms associated with prostate disease. Dallas Clouatre, Ph.D. is a researcher and author of ‘Flower Pollen for Prostate Health’. In his book he reports that controlled bee pollen consumption among men with prostate problems results in significant improvement and alleviation of symptoms. Specifically, “less nighttime urination, improved bladder emptying, and reduced prostate discomfort”. Dr Clouatre also says that bee pollen helps relax smooth muscle, making it easier to empty the bladder. It may also act as an anti-inflammatory and decrease the swelling of the prostate, resulting in a better urine flow and reduced discomfort.

Dr. Clouatre comments that 80% of those people using pollen find marked relief and that pollen may also forestall future problems. “Patients often report that they are no longer getting up at all during the night and that they no longer have difficulty or discomfort upon urination.” Source includes BW HealthWire, Nampa, Idaho June 9, 2000.

A Swedish study has also concluded that bee pollen can significantly affect inflammation and swelling of the prostate gland. Dn Gosta Leander conducted a double-blind controlled study of 93 patients in which a placebo was given to 43 men, and bee pollen to the remaining 50. Forty-six men out of the fifty who took the bee pollen were successfully treated, while the control group did not experience any significant improvement. Many experts believe that the natural hormones contained in bee pollen, along with a wide range of nutrients, magnesium, essential fatty acids and zinc, help to support the male urinary and reproductive systems. It is generally considered that men over the age of thirty could benefit from bee pollen’s ability to help prevent the onset of prostate disorders.

Bee Pollen and weight control – Our body processes all nutrients and deals with them according to the type and quantity consumed. Consumption rates for calorie-bearing nutrients, coupled with the rate of our metabolism, will generally determine whether we build fat, maintain our body weight or loose weight.

However, we can help our body become more efficient in processing certain nutrient types and certain food groups. By supplementing our food intake with certain nutrient combinations, we can create an environment where we become more efficient at processing carbohydrates, fats and sugars, and can avoid under some circumstances the production of excessive body fat. More on using bee pollen for weight loss

Pollen contains over 5,000 enzymes and co-enzymes, considerably more than is present in any other food. These enzymes are necessary in the body for digestive function and immune function. The enzymes present in bee pollen are considered important in creating a chemical balance in the metabolism.

This ‘balancing’ or ‘regulating’ function may be the key factor in bee pollen’s ability to assist in weight regulation.
When taking bee pollen as a diet supplement, it is best consumed an hour or so before meals. Where body weight is normal, and there is no desire to loose weight, pollen may be consumed with, or directly following a meal.

Some important studies have been conducted into the role of bee pollen in helping to control body weight. S. Blauer (Hippocrates Health Institute) “Bee pollen minimizes, reduces or eliminates the normal person’s cravings for heavy concentrated protein… [bee pollen] aids in the digestion of other food”

Bee Pollen can also supplement nutritional intake in certain areas that are inadequately catered for by the foods that we eat – providing essential vitamins and minerals that are deficient in processed foods.

How is Bee Pollen processed?– The beehive is a remarkably efficient workplace constructed and operated in a way that has remained unchanged for millions of years. The beehive contains a brood chamber where the Queen bee lays her eggs. The brood chamber is the larger of several chambers within the beehive, the smaller chambers are where the worker bees store the honey and pollen.

The pollen is collected in “pollen traps”. In commercial hives, these traps are created by the beekeeper and consist of mesh wire with small apertures which brush the legs of the bee as it enters the hive. The pollen granules then fall into a tray, which is removed by the beekeeper.
In most cases, little or no ‘processing’ is performed on the pollen after it is removed from the hive in its granulated state. It is purged or sifted of any foreign particles, and then packaged and generally frozen.

In its raw state it should be maintained frozen until it is ready for consumption, at which point the thawed bee pollen should be kept refrigerated until consumed.

A more convenient way of consuming pollen is in capsule form. Capsulated pollen if processed correctly, contains all of the nutritional content of the raw pollen but has a much longer shelf-life, typically 3 or 4 years.
Bee pollen has no regulatory status, it is considered a food and not a herb or vitamin supplement. There are no guidelines for effective daily dosages, but many people take upwards of 1000mg per day.

What is the difference between ‘domestic’ bee pollen and ‘imported’ bee pollen – This is an important question. Imported bee pollens, predominantly from China, are often purchased from unregulated facilities and may contain contaminants. In certain parts of China, beekeepers use lead-based paints to paint their beehives, and these ‘heavy metal’ contaminants may enter the pollen or other substances from the hive. In most cases, reputable manufacturers will use domestic bee pollen as it is in abundant supply.

Summary
Bee pollen is a nutritive power-house providing a vast array of potential benefits to our health. Termed a ‘super-food’ and labeled by ancient cultures as ‘The Food of the Gods’, bee pollen contains all of the essential nutrients to sustain life.

Valued by many for its energizing and stamina building function, it offers so much more than a quick energy-boosting tonic. Containing a high concentration of amino acids, the immune building properties of bee pollen are rivaled only by those of Royal Jelly and other products from the beehive. When the beehive products are combined, a special ‘synergy’ is formed which is far greater than the sum of the individual parts.