Fifty years ago a Senator from Wisconsin, Senator Gaylord Nelson, had an idea…an idea that sparked a nation-wide movement which, over the decades, became a worldwide movement. Nelson had long been a champion of environmental issues and was deeply concerned about what he saw as the deteriorating environment in the United States. In 1969 a massive oil spill off the coast of California, devastating the coast and killing thousand of birds, fish, and marine mammals, gained national media attention and opened the nation’s eyes to the issues of air and water quality. During the same time Universities across the nation were using teach-ins to protest the Vietnam war. Senator Nelson got the idea of using teach-ins to teach people about and get the nation behind environmental issues. He asked Congressman Pete McCloskey to help him and they recruited a young student activist, Denis Hayes, to organize teach ins across the country. They chose the date of April 22 because it fell between most colleges spring break and final exams. Hayes thought that the idea had the potential get all Americans excited about environmental issues so he expanded efforts beyond college campuses to include all sorts of organizations and faith-based institutions. They named the day “Earth Day” which gained them a lot of media attention. 20 million Americans participated in rallies, protests, and teach-ins during the very first Earth Day. Earth Day united groups that had been individually protesting about things like oil spills, animal rights, pollution, pesticides, etc… around a single day and shared values creating a powerful political voice that crossed political lines and gained support from both political parties, all age groups, both business and labor groups. The first Earth Day led to the creation of the US Environmental Protection Agency (the EPA), and the passages of many environmental laws including the Clean Air Act, The Occupational Safety and Health Act (OSHA), and the National Environmental Education Act. In following years many more environmental laws were passed including the Endangered Species Act. In 1990 Earth Day went global and was celebrated in 141 countries. Over the decades it continued to build and now is celebrated by over a billion people in 193 countries. 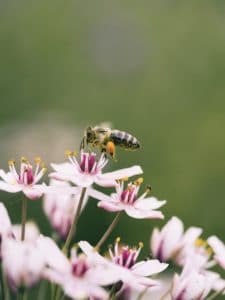 Every year on Earth Day we like to talk about bees and bee health. Bees are vital to our business. We use what the bees collect and produce in their hives to create our products. The benefits of Royal Jelly, Bee Pollen, Propolis, and honey are numerous. These bee produced ingredients have been used since ancient times to sweeten food, heal wounds, and prevent infection. Bees are also massively important pollinators. Without bees many foods would disappear.

2020 marks the 50th anniversary of Earth Day. The theme this year is climate change. Science has told us that climate change, if left unchecked, will cause changes in our weather patterns which will affect crops, stronger storms, severe flooding which will eat up coastlines all over the planet….but we wonder about what will happen to the animals…to the pollinators…to the bees. Bees already face many challenges, including loss of habitat and Colony Collapse Disorder, but what additional challenges would they face if the planet heated up a few degrees. Of course, climate change will accelerate loss of habitat for the bees, but scientists are also studying things like what a hotter hive would mean for bees. Scientists from Northwestern University conducted a two year study to see what temperature differences in bee hives would do to the bees. They set up three different sets of hives…one set was painted with reflective paint to make the hives cooler, a second set was painted black so that the hives would absorb more heat and make the hives warmer, and the third was made out of a clear material and was used as the control for the study. The findings were published in Functional Ecology, the British Ecological Society’s Journal. They found that many more bees died in the hives that were painted black than in either of the other two hive sets. The surviving bees were

smaller due to loss of body fat. The heat also caused disruptions in their hibernation. Other scientists are doing research on the changing Phenology, the timing of when something occurs. For example, on a warmer planet flowers and plants will bloom earlier than they do now. Scientists from Dartmouth are conducting studies to see if the bees will follow suit. Will hibernation patterns change or will the flowers and plants come up with no one to pollinate them?

The whole planet is celebrating the 50th Earth Day at home this year. I hope some people, like me, are thinking about our tiny pollinators…the bees. Think about what their pollination means to us. Think about the wonderful things they produce for us!