OK, so I know you’ve probably done some research on royal jelly, but you haven’t heard from the real expert… me! 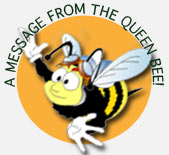 That’s right. You don’t really know what royal jelly is capable of until you talk to the King of all Experts… um… well… in this case, the Queen. So, take it from me (the Queen Bee), it really is all it’s cracked up to be, and more!

How do I know?

Well, I start feasting on it before I’m even born! While I’m developing, my larva is surrounded by royal jelly. So, by the time I’m ready to grace the world with my presence, I’ve got super-bee strength.

And, trust me, I’ll need it! Throughout each egg-laying season, I’ll lay over 1,500 eggs per day. That’s one egg every 30 seconds! (And, no, we don’t have epidurals in the hive. So you’ve really got to bring your A-game if you’re the Queen Bee!)

You’d think I’d be exhausted from single-handedly keeping the population of my hive going, but I actually live 40 times longer than my worker bees. I’m also twice their size and double their weight. While none of this would be considered great if I was a Hollywood actress, it’s a real head-turner if you’re a bee… Trust me!

Genetically, though, I’m no different from all of those worker bees. The only difference between me and them is the royal jelly I eat. You see, they don’t get to feast on it like I do. Oh sure, they get it for a couple of days during their development. But after that, it’s all mine!

Want some scientific proof to back me up? (I know how fussy you humans can be about science!)

Luckily, there are plenty of non-bee scientists that have devoted a whole lot of time and energy to figuring this stuff out. They’ve even given royal jelly to fruit flies, and the results were the same. The ones who got the royal jelly were bigger, stronger, and lived longer. [you can read more about the benefits here]

So, as you can imagine, there are all kinds of humans who want in on this RJ action. (I can’t really blame them. After all, us Queen Bees ARE pretty fabulous, in my humble opinion!)

While it won’t make you bigger and stronger (sorry to all of you who dream of being an All-Pro linebacker one day), it may just help you do some pretty amazing stuff.

Just ask the Ancient Egyptians. Even without the benefit of all your fancy modern science, they knew that royal jelly was pretty awesome. In the days before you humans had your expensive skin care lines, the Ancient Egyptians used RJ as a face cream. Now that you think about it, have you ever seen a picture of an Ancient Egyptian (or a bee, for that matter) with wrinkles? I didn’t think so!

But royal jelly won’t just help you have the smooth, flawless skin of a Queen Bee. Its benefits go way further than that.

While it may not help you have as many kids as I do, it can maybe help boost your sexual performance. And, if you’re lucky enough to have a “hive” of your own to take care of one day, it can also help fight off insomnia, exhaustion, and anxiety. Trust me, as someone who (literally!) has thousands of kids swarming around, I know how debilitating those things can be when you’re trying to be a good parent!

And while you may not live as long as I do (thanks to RJ, some of us Queen Bees can live up to 7 years – compared to worker bees who only live 7 weeks!), royal jelly and it’s presence in a healthy diet can help you live longer. That’s because it has been shown in studies that it may have the capacity to help prevent serious health problems like heart disease, liver problems, asthma, and gout – thanks to its incredibly rich supply of vitamins and minerals.

But what good is living longer if you don’t feel your best? Luckily, this product might be useful in helping you fight off some of the tell-tale signs of aging – like menopause. (And, take it from me, that’s a biggie. No one likes a cranky Queen Bee!)

Even the littlest “bees” in your “hive” can benefit from royal jelly. In Germany, a group of doctors gave royal jelly to premature, underweight babies – just like I got it as a baby bee. The result? They all gained weight! In fact, they each reached a healthy weight and enjoyed a more stable nervous system.

Bottom line – it’s not every day that a distinguished member of royalty shares her secrets with you. So, take a lesson from this Queen Bee, and get your hands (or your stinger, as the case may be) on some royal jelly!